“When the violence erupts, as it so often does, I struggle for words. These speak to me today.” — LeDayne

My Blood is a War Zone

Falafel tastes the same in Tel Aviv and in Beirut
Sand in the Negev feels the same as in the Rub al Khali
The word for charity is the same in Hebrew and in Arabic
Tzedakah and sadaqah
God is the same in Jerusalem and in Mecca
Covered heads and scholarly traditions
Don’t cease with lines on a map
The blood of Khalil Gibran gushes through my veins
The blood of Sholem Aleichem through my arteries
With each heartbeat a rush of contention
Airstrikes and iron domes cut those family ties
Uprisings and bombings are as caustic as acid
Two leaves on the same branch of the olive tree of life
Bleed the blood of brothers because of constant strife
Each platelet a settlement or a terrorist cell
Yearning to burst at the first imbalance
Like a hypotonic transfusion of an incursion or an intifada
An orphan in Haifa weeps the same as an orphan in Ramallah
There’s total destruction when two types are mixed
A city holy to both can be torn apart so quickly
Like the quest for peace across the whole region
Not peace with an enemy so very different
Peace with ourselves, our own vital fluid
We’re all the sons of Abraham
And when I pray
In a mosque, a church, or a synagogue
God is always there
My blood is a warzone 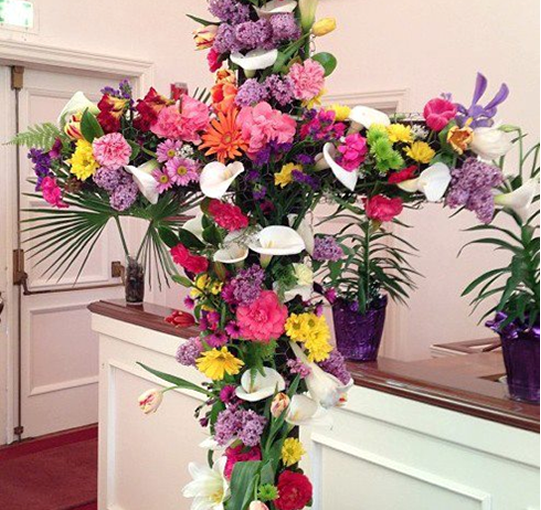 In commenting on the Easter texts for this year, David Lose writes, “…when God raised Jesus from the dead God was creating a new reality; overthrowing death, sin, and all that would oppress us; and declaring once and for all that life is more powerful than death and love more enduring that tragedy.” A new way of seeing things, a new reality, a new creation, a new thing – God’s realm, God’s reality, God’s creation, God’s thing. Sunday we used Isaiah 65 as the text for the Easter sermon – “For I am about to create new heavens and a new earth; the former things shall not be remembered or come to mind. But be glad and rejoice forever in what I am creating; for I am about to create Jerusalem as a joy, and its people as a delight. I will rejoice in Jerusalem, and delight in my people…” (Isaiah 65:17-19b).

This text is consonant with our theme for this year, “God’s new Thing” – “Look! I am doing a new thing; now it sprouts up; don’t you recognize it?” (Isaiah 43:17). Sunday I said that, among other things, God’s new creation is character-ized by liberating freedom, radical hospitality and amazing grace. These are rea-sons to shout “Alleluia!” and to dedicate ourselves to making God’s new thing instrumental in our lives and in the world around us. Following Barth’s famous reminder that we should carry the gospel in one hand and the newspaper (or internet?) in the other, I want to just touch on four issues currently “in the news” that I believe need to be addressed in making God’s new creation a reality on earth.

The first is marriage equality. Two organizations to which I belong, the Alliance of Baptists and Association of Welcoming and Affirming Baptists were official participants in a Service of Prayer for Love and Justice held Monday evening, March 25, at the Lutheran Church of the Reformation in Washington D.C. in advance of the Supreme Court hearings in regard to California Proposition 8 and the Federal Defense of Marriage Act. If I had been closer, I would have joined in. It is quite appropriate to pray for wisdom and justice in this matter.

To me, it is absurd for Christians to continue to argue for the sanctity of our cur-rent marriage practices as if they were somehow scripturally ordained and ancient. They are neither. Marriage has rarely been a sacred practice throughout history. If you want to read a trenchant commentary on this absurdity, I refer you to an essay by Christian ethicist, Miguel de la Torre on Christianity’s struggle to correctly interpret the gift of marriage.

As I have argued before, a Baptist perspective on God’s new creation would not allow us clergy to act as agents of the state (i.e., signing marriage licenses and making proclamations for the state). It would encourage us to bless all sorts of relationships in God’s name. It would challenge us as a community to support and sustain healthy relationships among all God’s children. It is past time for the church to treat all of God’s children equally and fairly, regardless of their God-given sexual orientation or gender identity.

Equally absurd and even more deadly are the specious arguments being used by various firearms advocates to oppose gun control. Twice in Isaiah, the prophet envisions God’s holy mountain, a place where “they shall neither hurt or destroy.” There is simply no room for assault weapons, large magazines of ammunition and the unmonitored sale of firearms in God’s new creation. In fact, “the wolf lies with the lamb” in a sacred image that moves us beyond enmity, the projected need for security and, I suppose even hunting. We may not be ready to become vegetarians and we may feel some need to protect ourselves, our loved ones and our homes from the difficult exigencies of modern living, but reducing the type and amount of weaponry generally available can only move us closer to God’s new creation. It is shameful that a powerful gun lobby can hold the nation’s leadership hostage when a growing majority of our citizens favor gun control and evidence from all over the “first world” testifies to the effectiveness of gun control.

Immigration Reform is in the news because the president has committed himself to this as a legacy issue for this administration. This week the Associated Press has made a (belated) decision to drop the hateful moniker, illegal immigrant, from the repertory for its reportage. Just yesterday, I saw on facebook this pro-vocative quotation from Elie Wiesel, “No human being is illegal. Human beings can be beautiful or more beautiful, they can be fat or skinny, they can be right or wrong, but illegal? How can a human being be illegal?” Spoken like a true citizen of God’s new creation, Wiesel has long been one of its key prophets for our times.

We do not have the authority to declare any of God’s children illegal, unwanted or unwelcome. I know that immigration reform is complicated but that is not a justification for avoiding it. People who come to our shores looking for relief from oppression or just looking for a better life for themselves and their families need to find a welcome. Without delving into economic injustice and inequity, in God’s new creation (as we find on this planet for which God has given us responsibility,) there is enough resource for everyone to live well, without fear of hunger and homelessness. Hymn writer Brian Wren urges us to “Break the bread of belonging. Welcome the stranger in the land. We have each been a stranger; we can try to understand.”

Finally, there is ongoing news coverage of war and threats of war. As we try to scale back our military operations in Afghanistan, there are new threats in Syria, Iran and Korea. Deep-seated, irrational enmity, ancient and new, threatens to destroy the earth and its people. God’s new creation is a “peaceable kingdom” and as followers of Jesus, we have committed ourselves to the Prince of Peace. It becomes vital for us actively to bear witness to and work for peace on earth and good will among all God’s people. As no one is illegal in God’s new creation, neither is any-one enemy. Jesus, himself, taught us that the one we judge to be enemy is actually our neighbor! Somehow we must gain the perspective, believe it and hold on to it that we are all God’s children…everyone of us, regardless of the differences we may want to emphasize. God’s amazing grace extends to and embraces one and all.

In another commentary on Sunday’s text, biblical scholar, Arland J. Hultgren writes, “Easter…marks the beginning of a new creation. It begins with the resurrection of Jesus, and it continues in the passing of time where the gospel is proclaimed and people come to faith.” In the passing of time and in living out the gospel, the new creation comes closer and becomes more real. Hultgren concludes with a challenge to all of us who would be Easter people, citizens of God’s new creation, the living body of Christ. “The church,” he says, “at its best continues to be the community of the new creation in a world that is too often headed for dissolution by violence, abuse, death, and destruction. Being peo-ple of the resurrected Lord Jesus, the church is in the business of praying for the renewal of the world and seeking to renew it.”
This is God’s new thing for us, ancient and timeless as God’s own being. We are to pray for and to work for the establishment of God’s new creation, of God’s realm (as Jesus kept proclaiming it) on earth, here and now. It is a challenge and it is a gift to be called to such a life. More reasons to join the chorus and shout, “Alleluia!”