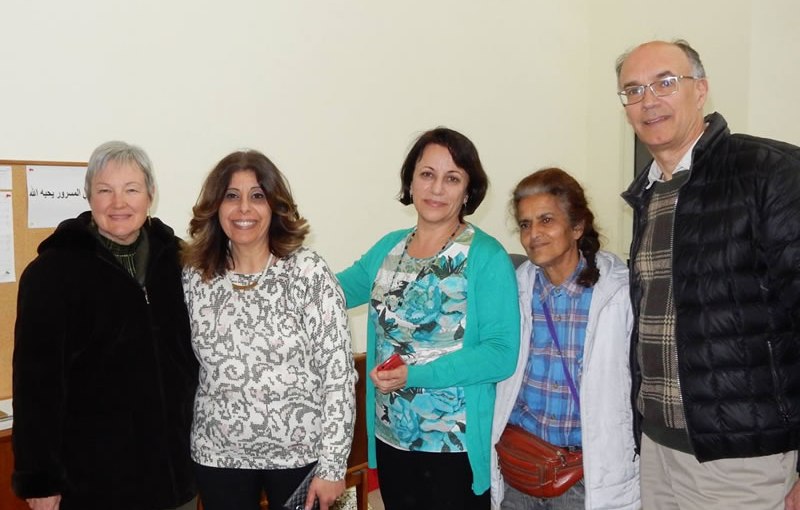 Greetings from Nazareth in Galilee!  Sharon and I flew into Tel Aviv after finishing our time in Lebanon.  We spent a few days in Jerusalem before going up to Nazareth to stay with Bader and Rula Mansour.

Bader is the General Secretary for the Association of Baptists Churches in Israel (ABC in this trip notes edition).  Rula is a professor at Nazareth Evangelical College.  Rula is working on a PhD in conflict transformation at Oxford University, so she’s very interested in our work.  She’s also working on developing peace studies programs at NEC and their sister institution Bethlehem Bible College.

Before we got to Nazareth Sharon and I had a few days in Jerusalem.  Of course, we enjoyed the Holy Land sights, especially where Jesus wept over Jerusalem because they did not “know the things that make for peace” (Luke 191.41,42).  We also did some work.  We visited Bethlehem Bible College (where we’ll be next week) to hear Alex Awad speak on a Palestinian Christian perspective on the Arab/Israeli conflict.  Then that Sunday we preached at the East Jerusalem Baptist Church where Alex has been pastor for some 20 years.  Our topic was on being prisoners of hope, from Zechariah 9.  (Pop me an e-mail if you want a copy of the sermon.)  Back in the early 1990s I was part of an advocacy effort with our government and the government of Israel to allow Alex back to Jerusalem after his seminary studies in the U.S., something he was denied for 8 or 9 years despite the call of the East Jerusalem Baptist Church.  We also got an amazing 4-hour tour of East Jerusalem related to the politics of the Separation Barrier, the expansion of Jewish settlement, and the social and legal pressures to push Palestinians out.  The tour was led by a former Israeli tank commander working with Ir Amin, an Israeli NGO doing educational work about Jerusalem for a sustainable peace.

In Nazareth Rula and Bader lined up a series of trainings for us to do:  in the local Baptist church, for the Nazareth Baptists School staff, and for women in Musalaha (Christian Palestinians and Messianic Jews working on reconciliation in Christ).  We also met with Baptist pastors, sharing with them the resource of my “Bible Study Manual on Conflict Transformation” which we have in Arabic.  The centerpiece was a two day conference sponsored by the Nazareth Evangelical College for therapists and counselors from the Arab evangelical churches.  We had an outstanding group from across Galilee including pastors, professional counselors, and many people involved in family ministries.  We were also struck by how many were involved in grassroots reconciliation work in Israel and in Palestine.  We focused on the dynamics of mainstreams & margins as well as trauma healing.

One thing I’ve loved is the music.  Here and in Lebanon we’ve heard some great Christian music in Arabic forms.  In the times when there has been an English translation I’ve been moved by the depth of the lyrics, especially for people who face deep struggles in faith.  It’s great to worship in music that isn’t just translated from the English praise songs but is an expression of people’s heart language.  If U.S. American Christians could hear God’s praises in some of the fires of suffering these sisters and brothers have been through it might shift our way of thinking about what God is doing in the Middle East.

From Nazareth to Bethlehem–that will be our journey in the coming week.  Of course, we plan to see the holy sites, but our main task will be teaching in Bethlehem Bible College as we’ve been teaching in Nazareth.  We won’t be taking a donkey or foot, but rather car.  Still we will be crossing the border between Israel and Palestine, a tightly controlled crossing.  Our hearts are heavy to be amid such intense lingering conflict in a place where the message of peace was brought so powerfully by so many.  Join us in prayer!