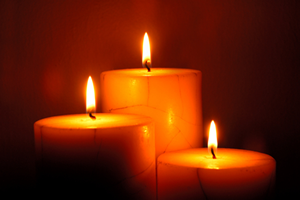 It was quite a racket that night. I awoke with a start, thinkin’ it was an earthquake or one of those rare winter thunderstorms that sweep these old hills. Then I thought I could make out words and a voice, loud as a trumpet. My first notion was, don’t these young’uns know that an old man needs his sleep. This is no time to be carryin’ on, out here with the sheep, in the middle of the night. We all need a nap now and then to make it through these long, cold nights. Have they been into the wine again?

But then my eyes were drawn up, toward a dazzlin’ light hangin’ in the sky, just above the flock, and I realized somethin’ strange was ahappenin’.   I could see the lads down on their knees, shieldin’ their eyes against that light. What was goin’ on?

The voice seemed to come right outta that light, “Don’t be afraid,” and us all quaking in our boots! “Don’t be afraid?” Sure, that’s easy for you to say. You seem to be runnin’ this show. But me and the lads were shiverin’, and I can tell you it weren’t from the cold. Still, the voice kept repeatin’, over and over, strong, yes, but also gentle, kinda’ soothin’, “Don’t be afraid.” After a while we got kinda’ used to it. Some sort of heavenly presence, so it seemed to me. “Do not be afraid; for see—I am bringing you good news of great joy for all the people…” I guess we were ready to think about that possibility. Lord knows we coulda’ surely used some good news. You know shepherds don’t have a lot to celebrate – out here with the sheep day and night, rain or shine, hot or cold. It’s a crummy job but someone’s gotta do it. I can tell you it ain’t the “cream of the crop” that ends up out here tendin’ the flocks.

Alright, we’ll bite. What’s this good news that’s gonna give everyone such great joy? “…to you is born this day in the city of David a Savior, who is the Messiah, the Lord.” Now wait a minute, you’re sayin’ that the Messiah is comin’ to us, to a buncha tired, dirty shepherds out here in the hills? How can that be? We know all about the promise of the Messiah. We be may be ignorant but some of us listen, ya know, maybe even hope a little. We’ve been awaitin’ all our lives for the Promised One, but this is too much. To us the savior comes? How can that be?

“…to you is born this day in the city of David a Savior, who is the Messiah, the Lord.  This will be a sign for you: you will find a child wrapped in bands of cloth and lying in a manger.”  You say the Messiah is agonna’ be born over yonder in Bethlehem, that sleepy little back water? I dunno’…and we’re agonna find him wrapped in some old rags, lyin’ in a feed trough? Well, if that don’t beat all! You expectin’ us to buy that? We may be livin’ out here on the edge of everything but we’re not abuyin’ that line.

You can see my point, can’t you? Why in the world would an angel show up with such a crazy message for a ragtag buncha shepherds on some hillside in Judea? Weren’t angels supposed to show up in Jerusalem, somewhere around the temple, to make such an announcement? And weren’t the Messiah supposed to powerful and rich and leadin’ an army outta heaven? Weren’t the Messiah supposed to liberate us from the Romans and make us all rich and powerful, too? What are we supposedta make of some poor peasant babe born in a barn in Bethlehem, of all places?

You know that angel weren’t havin nothin to do with our lacka believin’. He repeated the message one more time to be sure we heard it. Then just so we knew he was darned serious, there was whole mess of that dazzling light, like an angel choir, singin at the top of their lungs, “Glory to God in the highest heaven, and on earth peace among those whom he favors!”  After a good long while wrapped up in that sound the music seemed to fade away. We were all alookin’ at one another with our mouths wide open. Did you hear that? Did ya see the light? Whaddaya think? I’ve never seen anythin’ like it. Suppose we oughtta go on over to Bethlehem and check it out? Well, I don’t suppose there’d be any harm. Once we get the sheep quieted down, we could leave Benjamin and Nathaniel and Jacob. They’re good, strong lads. They could look after the flocks for a while. Now, now, don’t fuss. We’ll tell you about it when we get back, and if there’s anythin’ to it, you can make your own way into town after. It’s settled then. We’re off to Bethlehem to check out this thing the angel told us.

This is the redeeming truth, God comes to surprising people. No one at the time of Jesus’ birth would have predicted angel choirs, singing to shepherds on a windswept Judean hillside. No one would have expected the Messiah to be born in a stable in the little village of Bethlehem to an unwed, teen aged mother.   No one, except God who seems to delight in surprising us by coming near when and where we least expect it.

Our McLaren resource gives us two texts for this morning. One is this familiar and beloved tale of angelic airs and earthly echoes. The other is much less glamorous.   In fact, it’s so obscure, it doesn’t make the lectionary. Matthew, like Luke, gives us a genealogy of Jesus. Matthew’s begins with Abraham and traces Jesus’ heritage through David to Joseph, which, of course, is curious because he claims Joseph is not Jesus’ father. Luke, as some of our guests from Choral Project will remember, traces Jesus lineage from Joseph backward through David, Abraham and Adam to God. Though you wouldn’t think singing someone’s family tree would be desirable, a few years ago we sang a very moving rendition Luke’s list by the great Estonian composer, Arvo Part. However our point today is not to sort out the intention or meaning of these highly creative genealogies.

In support of his argument about surprising people, McLaren notes that in Matthew’s list, five women are uncharacteristically mentioned. Tamar, who pretended to be a prostitute; Rahab, who was a prostitute and Gentile; Ruth, a Gentile, who climbed under the covers with the wealthy Boaz to ensure a future for herself and her mother-in-law; Bathsheba, married to a Gentile but drawn into adultery by the great King David himself; and finally the teen-aged Mary who claims to be pregnant without the assistance of Joseph, her betrothed. A curious collection, to be sure, yet all are plucked from Jesus’ family tree.

McLaren writes that this “must be Matthew’s point. Jesus isn’t entering into a pristine story of ideal people. He is part of the story of Gentiles as well as Jews, broken and messy families as well as noble ones, normal folks as well as kings and priests and heroes. We might say that Jesus isn’t entering into humanity from the top with a kind of trickle-down grace, but rather from the bottom, with grace that rises from the grass roots up” (Brian D. McLaren, We Make the Road by Walking, pp. 75-6).

Jesus, the Christ, the Messiah, the Savior of the World comes in and through a collection of women who were not only undervalued simply for being women but in these cases were women of questionable reputation – at least by the world’s standards. Of course, we know from their stories that each was remarkable in her own right and one of God’s delightfully surprising people.

Women of questionable reputation and shepherds, surprising people indeed! McLaren says, “Shepherds were marginal people in society – a lot like Tamar, Rahab, Ruth, Bathsheba, and Mary. They weren’t normal ‘family men,’ because they lived outdoors most of the time, guarding sheep from wolves and thieves, and guiding sheep to suitable pasture. A younger son, for whom there was no hope of inheriting the family farm, might become a shepherd, as might a man who for some reason was unsuitable for marriage. It was among poor men like these that Jesus’ birth was first celebrated” (Op. cit., p. 77).

So often it is the least and the lost and the last to whom God reaches out, embracing them with everlasting arms, regaling them with good news, empowering them to transform their own lives and the world around them. Surprising people, like fishermen and tax collectors and prostitutes and sinners of every stripe. Perhaps even people like you and me. Can you hear the angelic voices calling again? Don’t be afraid. We bring good news of great joy for you and all the world. Friends, to you, to me, to all of us is born this day a Savior who is Christ the Lord. Are you ready to go where the angels send you, to see for yourself what God has done? Are you willing to hang out with women and men, who, having been shoved to the margins of society, now gather around a tiny baby, born in improbably difficult circumstances, offering to them and us hope for the world? Angelic airs and earthy responses – Glory to God in the highest; peace and good will to all the earth. Amen.